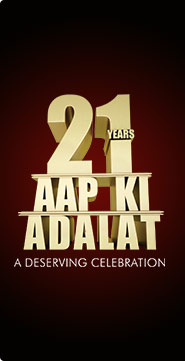 Since its inception in 1993, Aap Ki Adalat has seen personalities ranging from Top Politicians, Bollywood Stars to Sportsmen and Spiritual Gurus, being grilled on the small screen by Rajat Sharma in his own inimitable way.

This show has witnessed prominent faces pouring out their emotions – some trying to browbeat, some defending their acts and some of them even shedding tears!

Aap Ki Adalat, a regular weekend feature on India TV, has consistently been ruling the television ratings for the last two decades. Let's raise a toast for its successful completion of glorious 21 years!

India TV will celebrate the glorious 21 year-long journey of Aap Ki Adalat, India's longest-running Television show hosted by Rajat Sharma. This has been an eventful journey, which began in 1993 and the show is still going strong, attracting millions of new viewers week after week to add to the already existing huge base of appointment viewers who watch this show regularly on weekends.

This historic journey is being celebrated like a never before event in New Delhi on December 2nd, 2014, when the movers and shakers of India will come together to relive the journey.

Bollywood Stars and India's Top Singers will rub shoulders with the jet-set crowd of Powerful Politicians, Cricketers and Bureaucrats to celebrate this event.

The event coverage will simulcast on India TV and Star Plus on December 7th at 10 PM.